Findings are small components used to make a collection of beads into jewelry. Usually these are metal, but they can also be made of wood, stone, or other materials. Jump Ring Used to connect jewelry parts, like attaching a clasp to a necklace. Jump rings are a simple wire loop. To open them, push one end forward and one end back. If you enlarge the circle by prying the ends farther apart you will weaken the metal. Split rings are more secure but bulkier. Split Ring Double wire rings (like a keychain), used to connect different parts of a piece of jewelry. A split ring is more secure than a jump ring but also bulkier. Bail A finding that connects a pendant to a necklace. They come in different forms: some clip onto the pendant, some have mounts to glue the pendant to, and some attach to a ring on the pendant. The purpose is to hold the pendant flat when worn. Headpins Headpins look like small thin nails. Put a few beads on a head pin, bend a loop in the top, and you have a dangle which can be made into an earring with the simple addition of an earwire. Eyepins Eyepins are just like a headpins except instead of a head there is a loop. You can make these yourself out of wire - just cut a length and make a loop in one end. But if you want them super-straight you'll have to buy them. Crimp Beads Crimp beads are small metal beads that you squish (crimp) onto beading wire to make the beads stay where you want them, or connect beading wire to a jump ring or clasp. They can be corrugated or smooth. Callotte Metal findings that cover the knot at the end of a string of beads. Callottes (also called clam shells) clamp sideways onto the knot. Tying the knot around a seed bead and adding a drop of glue secures the knot. Close the callotte with pliers and snip the excess thread. Also called clamshells or bead tips. Bullion Also known as French Wire or Gimp. This is a very finely coiled wire that forms a flexible tube like a spring. It is used for finishing the ends of strung jewelry pieces. It is threaded over the cord to cover it where it is normally exposed, such as where the cord goes through the loop on the clasp at the ends of the piece. It gives a professional look and protects the bead cord from fraying from exposure. The downside is that it tends to wear rather quickly itself, so it is good for fancy jewelry that you don't wear often. Earwire The most common commercial earwire has a coil, a metal ball, and a loop that can be opened to attach to an earring. Earwires are available in different compositions and finishes, like gold filled, silver plated, brass, or steel. Choose a color that complements your earring design. Barrel Clasp A common form of clasp, especially for necklaces. Can be hard to attach on bracelets without help, and often comes undone on anklets, so is best suited for necklaces. Hook and Loop Clasp A type of clasp that is very easy to use. It can be made by hand with some wire (gauge 20 or thicker), however it may come apart if the hook is stretched. Hammering the wire with a ball pein hammer and anvil can harden it so this is not an issue. Fish Hook Clasp The fish hook clasp refers to the extra safety mechanism. When the clasp is opened, a hook wraps around a safety bar. This added security feature is in place in case that the clasp should accidentally open up, and works quite well to secure the necklace when it's being worn. 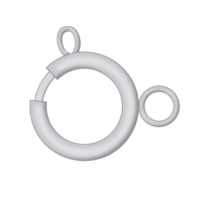 Spring Ring A very common clasp which is inexpensive and secure. The drawback is that it requires nimble fingers to use. Toggle Clasp A type of clasp consisting of a bar which fits into a loop. It operates on the same principle as a button. Toggle clasps tend to be bulky and therefore most appropriate for chunkier jewelry. This clasp is also sometimes used as a main decorative element in a necklace that clasps in the front. photo credit Choosing Beads That Work Together How to Use Beading Wire for Stringing Beads Into Jewelry 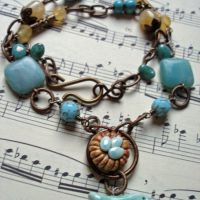 How to Make Wire Jewelry How to Make Hemp Jewelry How to Upcycle Plain or Boring Jewelry How to Add a Clasp Using Crimp Beads How to Organize Bead Supplies 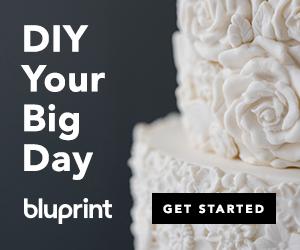