Garnets help you turn your visions into physical reality. They are stones of prosperity and pleasure, supporting you to live the good life!

Various types of garnets help with different types and levels of manifestation.

This type includes Tsavorite and Hessonite. They are both potent prosperity stones. They also support robust health and recovery from illness.

Tsavorite garnets are brilliant green and associated with the heart chakra and abundance. They provide an energetic motivation to pursue wealth and prosperity.

Hessonite garnet is a reddish orange stone sometimes called the Cinnamon Stone. It helps release negativity and fears and motivate you to transform blocks into opportunities.

Spessartine garnet ranges from light orange to deep red. It stimulates the fire inside you, leading to creative breakthroughs. It is also a magnetic attraction stone, drawing your best life to you. It supports creativity both artistically but also in terms of fertility.

Rhodolite is the most popular type of pyrope garnet. It is a deep reddish-purple. Rhodolite garnet helps the wearer release guilt and shame and be open to receiving love. It enables you to walk forward with a sense of clarity and self-worth. It helps manifest emotional wellbeing and an abundance of self-love.

Almandine is deep red, ranging from orangish-red to purplish-red. It is a stone of strength and rootedness. It helps you recover a sense of security and safety and belonging to the Earth. It is supportive of physical endurance and energy.

Andradite can be orange or brown, but it is most commonly black. The black variety is a powerful protection and grounding stone. It helps you tap into a wellspring of energy deep within the Earth. It is intensely purifying and can dispel negativity and depression.

Uvarovite is a green garnet that helps heal scarcity consciousness so you can manifest abundance. Any feelings of not-enough or insufficiency can be helped with uvarovite, whether they are about finances or self-worth.

Garnet as a Gemstone

Garnet is popularly known as a dark red gemstone, but it actually a group of gemstones that can be a variety of colors. It has been found as early as the Bronze Age and was known in Egypt and ancient Sumeria.

The six subtypes of garnet are:

Almandine and pyrope garnet are the most common in jewelry.

Garnet was named after the pomegranate and is the birthstone for January.

Uses: Abundance & Money, Empowerment, Love, Manifesting
Color: Red Gemstones
If you purchase through these links, we may receive a small commission. Disclosure 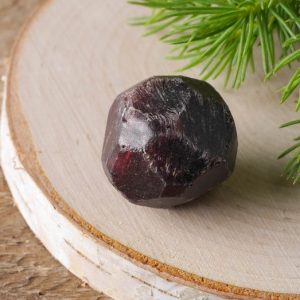 Disclaimer: Garnet Properties, Garnet Meaning, and Garnet Uses listed here are not a substitute for medical care. If you have a physical or mental illness, please see a doctor or mental health professional.