Jade comes in many colors, but green is the most common and well known.

Green jade carries the energy of the Earth and nature, providing a wholesome, nurturing energy that uplifts and soothes the heart. It draws the abundance of nature into your life, helping you create physical prosperity and wellbeing.

Jade supports you to enjoy just being alive–to slow down and smell the flowers–and to share them with others. It helps unblock the resistance we have to receiving what we need and love, and helps us get in the flow of Divine abundance.

Jade is a heart chakra stone, and it supports harmonious connections. It is a good stone to place in your environment to foster positive energy and relationships.

Jade as a Gemstone

Jade is actually two different minerals referred to by the same name. For centuries, two separate minerals were referred to and traded as jade because of their similarities. By the time a French mineralogist realized they were two different gems in the 1800s, it was too late. Today, they are differentiated into jadeite and nephrite, but often the two are still just called and sold as “jade”. Nephrite jade has long been revered by the Chinese, where it is called ‘Yu’. It is believed to reduce stress, and prolong life.

Nephrite Jade is a 6 to 6.5 and Jadeite is a 6 to 7 on the Mohs scale. Neither jade is an exceptionally hard stone, but both are very tough due to their microcrystalline structure. Because of this durability, jade was used by earlier civilizations for axes and weapons. Jade is an important part of the Chinese wedding ceremony as it is considered the concentrated essence of love. It has also been carved into ornaments, beads, and statues.

Jadeite is the more expensive variety and was originally introduced to Europe from the Americas where it was found by the conquistadors. It is actually not found in China. This variety of jade is found primarily in Burma and Guatemala. It comes in a wide range of colors including green, mottled green and white, whitish gray, pink, brown, mauve, yellow, orange, and lavender. Green jade of this variety is usually an apple green or emerald color. Colored jade (except green) is usually pale and unevenly tinted. It is more expensive because it is rarer, found in only a dozen places worldwide.

Nephrite jade is more common than jadeite and is found in mostly dark green shades. This type of jade is considered to be the “old and true Chinese jade”. Nephrite is slightly softer than it’s counterpart and is found in many countries including China, Russia, New Zealand, the United States, and Canada (British Columbia).

Due to jade’s toughness, it can be worn virtually anywhere. It is often carved and cut into cabochon styles for pendants, earrings, and rings. Jade can also be fashioned into a complete ring, much like the hematite rings you see. There are, however, many imitations of jade. “New Jade” is actually a gemstone called serpentine but looks almost identical. The easiest way to tell real jade apart is a basic scratch test (although this still isn’t a definitive test). Real jade should not be easily scratched by a knife while serpentine and many other imposters are. When purchasing jade, just make sure you trust the source and you should be fine. White jade can also be died to produce bright colors. 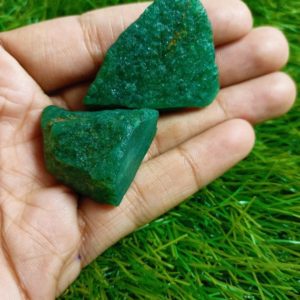 Natural Green Jade Matte Round Beads 4mm 6mm 8mm 10mm 12mm 15.5" Strand
560
If you purchase through these links, we may receive a small commission. Disclosure Disclaimer: Jade Properties, Jade Meaning, and Jade Uses listed here are not a substitute for medical care. If you have a physical or mental illness, please see a doctor or mental health professional.